You may have noticed that I let the whole month of September go by without a word.

Not without reason. Like Eliot’s April, I find September the cruelest month. By September I’ve about had it with the Plains version of summer–a sort of relentless boiling–but no, summer will not pass. Around mid-September you start to think it should begin cooling down, but it doesn’t. It just keeps on, in the 90s or better, every day. And the rains stop. No rain. Just hot, humid, sweltering dog days.

And here’s the clincher – they close the pools in August. Early August. So no relief there. We went all the way to Niobrara in September just to get to a pool that was open.
And it was delightful. 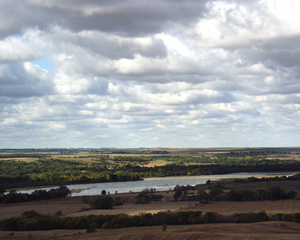 My wife’s father and stepmother, in a flash of brilliance and spending, purchased a massive chunk of land in the Niobrara river valley a few years ago. Then (and this was a years-long ordeal worthy of Hercules, or at least his contractor) they plopped a big house down on top of a ridge overlooking the river itself. It’s a wonder. After driving all day from our city, ever deeper into farm territory and then, in the valley itself, ranch territory, then up a never-ending gravel drive to the lonely ridge, you find it (unless it’s dark – then you drive right by it). It sits alone on the ridge, with no other sign of civilization in sight.

Beyond the ridge is the valley and the river.

The first time we visited was a bit odd. The three of us just piled in the car and drove up there one hot August day. It was as if we were visiting a three-masted schooner in the middle of a squall. Because they had built on the high point of the ridge, they got the full fury of the ranging wind. And that night was outrageously windy. You had to yell at someone just a few feet away — and I’m talking about inside the house. We had to crack the windows (no air conditioning), so the wind came in whistling and flapping the blinds all night. And yes, it was hot.

But they got the air conditioning in (a necessity in this place, not a luxury), and about a month ago they had the deck put on. The deck! We came up in early September with some friends, planning a mild weekend in the country. We arrived at night–I was in horrible shape. It had been a crushing day. I had been crushed. But when we arrived, we grabbed a cold beer and we went out on the deck. And the sky exploded.

I imagine there are people in the city, plenty of them, even in my city of the Plains, who have never seen the galaxy they live in. I myself had not seen it for some time, given that I, like most, spend my days locked in a straight-ahead stare at responsibility, tasks and the specter of tomorrow. Oh, you’ll step out on the patio at night and detect a few stars in the glare–look, I think that’s the Big Dipper! But in the dark of that lonely valley, we walked out on that deck and looked up, and we didn’t go back in until bedtime.

The stars, the stardust, the Milky Way, and Mars himself–they all were there for us, stretched across that impossibly wide and cloudless black bowl, to gaze on and to get to know again.

How wonderful to feel infinitely small and large again.