I read the comics pretty much every day. It’s a good, brief escape from reality.

Some comics I can’t stand, but I read them anyway – I’m not sure why.

So I was talking to some folks about how particularly bad the strip Funky Winkerbean is. The problem? Nothing really happens. It’s basically a bunch of people moping their way through very mundane lives.

I am actually an aficionado of bad comics. There’s something about them. Funky Winkerbean belongs in the “truly bad” category – it’s too maudlin and pathetic to rise to the heights of the “so bad it’s good” category, which is where I place Family Circus. So my complaint is real in the case of Funky.

I mean, as many have noted, there’s nothing worse than mediocrity. So if something is only “bad” in the sense that it’s commonplace and boring, then it’s really bad. But if something is truly, insultingly, unbelievably, surrealistically bad – well, sir, then it catches my fancy.

This describes Family Circus and, yes, Nancy to a “T.” Family Circus occupies a special place in the stratosphere of bad art, however, in that it operates under a pretense that it is entirely unaware of how bad it really is. Not to mention how unreal it is – no family – I mean not one – could live up the ideal of Bill and “Thel” (what is that, Thelma? Who is really named Thelma?) Keane. They are ideal humans – the kind who don’t exist.

As an aside, however, I do find Thel pretty hot in a matronly way, so tall with her round hips and ample bosoms. She telegraphs both motherhood and the (evolutionary) reason men are attracted to full-bodied women (because they can bare lots of healthy Billys, Jeffys, Dollys, etc.). Was this unintentional on Keane’s part? I think not.

And what of the kids? They are, in fact, indistinguishable from each other because they, too, are unreal. Real kids have likes, dislikes, and unpredictable quirks. These kids are all exactly the same in that the only thing they are concerned with is saying and doing things which adults are supposed to find “adoringly cute”. They are more akin to trained monkeys than human children.

There are many more ultra-bad strips. I’ll just stick to newspaper strips.

This is a patently bad high school strip full of two-dimensional, half-realized characters, all of whom are curiously unlikeable. It gets extra points for being badly drawn also – not “edgy” badly drawn like the phalanx of new Internet comic artists who can’t be bothered with anything beyond stick figures, but just a failed attempt at well-drawn cartoon figures. Extra creep-out points: the strip is concerned with the life of an adolescent girl, including all her boy-crazed yearnings, but it’s drawn by a middle-aged guy.

A sublimely bad comic similar to Funky Winkerbean in that almost nothing happens. However, it exceeds Funky in interest thanks to the unbelievably patrician personality of the main character. Mary is the light of reason surrounded by the chaotic darkness of human folly, and for that it actually makes pretty decent theatre sometimes. It gets bonus points for its unflinching dedication to the tradition of strip art – right down to the “radiating lines” coming off a person’s face when they’re shocked, surprised, or otherwise nonplussed.

This strip holds the dubious honor of being the slowest-moving strip of all time. Slower than Gasoline Alley and Mary Worth combined – we once clocked the action in this strip at approximately one week in Rex Morgan’s world taking up no less than four months worth of real time. I’m not kidding. June (Rex’s wife) was on a week-long cruise wearing the same bikini (and oh, did she look good in it) for weeks on end. It was once three weeks between breakfast and lunch. This strip has the bonus of being very professionally drawn – and all the women under 50 are built, as my mother would say, “like a brick shithouse”.

What can I say? The strip used to garner a kind of weird interest due to the somewhat bizarre aging process of its creator, Hank Ketcham – who, it turns out, never much liked Dennis (the character was modeled after Ketcham’s son, who later in life resented being his father’s muse). The strip devolved into daily panels featuring not Dennis in the starring role, but the right-wing rantings of his crotchety neighbor Mr. Wilson. Rather than snakes and snails and puppy dog tails, the strip’s themes centered on the ridiculous tax code, the declining spirit of an old man, and the meddling ways of the U.S. government. After Ketcham’s death, however, the strip descended into the depths of newspaper mediocrity at the hands of a soulless writing “team”, a la Garfield. 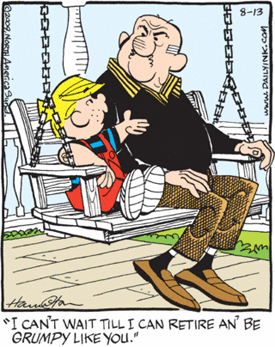