It’s disheartening to see the U.S. – North Korea kabuki theater performed again and again, always to the advantage of the Kim dynasty and the disadvantage of the West. The dictatorship has one unerring talent: the ability to fool American presidents into playing their zero-sum game. It starts with the rhetoric – bombast hurled at the new U.S. leader in hopes it will be returned (worked like a charm this time around). Then the nuclear brinkmanship (the reason for NK’s program being diplomatic leverage), and the ensuing worldwide panic, followed by the “high level” talks that pull all threatened parties into the mix (China, South Korea, Japan, etc.). The cumulative effect of these actions and their media-grabbing headlines is the only one the Kim dynasty is interested in, namely worldwide recognition of the power, legitimacy and importance of the North Korean regime.

But Kim, like the American president, is playing mostly to a domestic audience. The message? “It would be dangerous to remove me during this (never-ending) crisis.”

Americans should (but probably don’t) remember that this all played out previously, in 1994 under the Clinton administration and later between 2006 – 2007, as the Bush administration announced a “path to normalization” with Pyongyang. For both “agreements” North Korea had agreed to demolish its nuclear development facilities (!) and in the 2007 negotiations provided (doctored) footage to prove it had done so. Clinton and Bush were, of course, hoodwinked as today’s evidence shows. The 1994 Agreed Framework and 2006-2007’s so-called Six-Party Talks were nothing but stall tactics. The result is a nuclear-armed North Korea, now with ballistic missile capabilities. Soon they will have a nuclear-tipped intercontinental ballistic missile, if they don’t already, capable of striking anywhere in the world.

Today, apparently, the regime released three American prisoners , two of them having been scooped up under the current U.S. administration in order to create the leverage Kim is now strategically ceding. This is of course part of the wider, long-range gambit, which also includes a seeming cool-down between the two Koreas. Now the U.S. president will become overconfident. He will strut into the summit trap Kim has set thinking he has “the advantage.” (It’s The Art of the Deal, you know.)

I predict that at the peak of bilateral negotiations, per the dog-eared script, the Kim regime will find an excuse to introduce delay after delay as they produce false promise after false promise, backed by false evidence, their mission having already been accomplished: widespread media coverage of their power and influence, and a U.S. regime that has completely lost face by walking into their predictable, time-worn diplomatic trap. My question bares repeating: How will he react?

This is why the Obama administration refused to even engage with North Korea – they knew from Bill Clinton and George W. Bush’s experience that there was nothing in it for them. Unless sponsor state China does something about the Kim regime’s recklessness, there is nothing to be done by any other parties short of starting a world war:  China, Russia, North Korea, and Iran versus an isolated United States.

I hope it comes out differently this time, I hope North Korea is serous about denuclearization. But I’ve never seen the sun rise in the West. 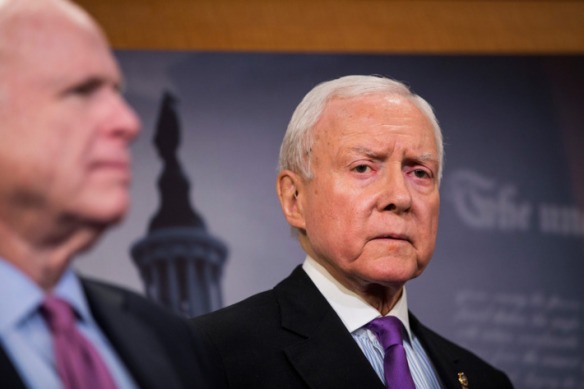 Perhaps Orrin forgot that the president publicly denigrated McCain and impugned his honor during the president’s disgusting 2016 campaign. As a reminder to Hatch, the president said of McCain: “He’s not a war hero. He was a war hero because he was captured. I like people who weren’t captured.” (McCain’s fighter jet was shot down over North Vietnam. He helped his fellow prisoners of war endure years of torture under the North Vietnamese at the infamous Hanoi Hilton. Since then, he’s had a distinguished career in Congress for decades, up to and including his dying days. He was the 2012 Republican presidential nominee.)

It’s really time to reconsider a knee-jerk party-line vote for your local GOP rep when they refuse to call out people like this.

We can do better. Much better. Right here in Nebraska we have outstanding, smart, fair-minded moderate candidates like Jane Raybould for Senate, Kara Eastman for Congress, and Bob Krist for Governor (OK he’s older than Ricketts but a far better choice than Dollar-Store Lex Luthor – unless you’re a fan of prison riots). Nearer to home there’s my old friend Nancy Meyer for NRD, friend-of-friends Megan Hunt for NE legislature, and probably someone in your own district who can help restore the separation of powers both in Washington and in our ailing, one-party-rule, would-be Kansas economic disaster.

This is not a partisan appeal. It’s an appeal to decency, to the simple, quaint notions of honesty and ethics in government. Some decent leaders remain in the Republican party (for some reason), like my State Senator John McCollister. But let’s face it – they are the last of the holdouts in a party that is no longer what it was when John McCain was running for president, a party being subsumed into the current president’s populist insurgent cause. It is a lost cause.

That’s all – please think, then vote.

The news is so frustrating. The media – out for ratings, just like the reality show star in the White House – portray our developing constitutional crisis as some kind of battle royal between two outsized personalities. The sense we get from the media is that we’re watching the trash-talking preliminaries of a heavily anticipated title match (although, of course, only one party to the fight is engaging in the trash talk). The idea is that we’ll have this big battle, and the winner will take all as he is showered with accolades by his loyal fans. The loser will vow to rise again, saying “wait till next year”. Then it will all be over, and we will shut off the TV and go to bed, satisfied that it was a very exciting man-to-man contest.

But that’s not what’s happening, not at all. What’s happening is we have a secretive, lying, cult-like, bullying, paranoid, ignorant, truth-averse, and very likely criminal gang squatting uneasily on what should be a presidential administration. They fear the revelations of truth and the application of the law so much, they and their co-conspirators in Congress appear willing to go above the law, to exercise raw power in challenging hundreds of years of legal and institutional precedent, in order to protect themselves and their cash cow – what the rest of us call the federal government. Anyone who threatens to reveal the truth they eliminate if they can, or try to intimidate into silence if they can’t (yet). They are not administrators, they are a modern day confederation of mobsters. They are looters and anarchists who demonstrate on a daily basis their utter contempt for the rule of law and for our democracy’s institutional norms.

Should they prevail, there will be no “next year” for this republic and its few dedicated defenders. We know how the “five families” ended up in the long run – they took everyone else down with them.

And opposed to them, we have a dedicated REPUBLICAN war veteran and prosecutor of lawbreakers, an administrator of justice, who has served honorably and with distinction for decades under Republican and Democratic presidential administrations alike (real ones). He runs an experienced legal team working quietly, professionally, humbly and methodically in the cause of justice.  The team has already secured guilty pleas from several of the administration’s former foot soldiers and lieutenants. There will be more. But, as opposed to the unhinged daily stream-of-consciousness tweets (mostly lies and fabrications) from the reality show star, their story is as yet untold. Seizing on that legally and procedurally necessary information vacuum, the mob attempts to explain the character of the investigation  to us as a witch hunt (without explaining to us why a Republican career legal professional would conduct a witch hunt against a presumably innocent Republican president).

The media should stop pretending this is a contest of wills devoid of legal or moral context. Based on all we’ve seen and heard, this is people at the top levels of government—in concert with an antagonistic foreign power and self-aggrandizing criminal leak weasel–attempting to bring down this republic and everything it stands for. They do it all in the name of ego and personal gain, allied with the most ignorant and self-serving among our citizens, their hallmarks being contempt for truth, ethics, morality, justice, or any other admirable quality that exhibits even the smallest trace of human decency.