Ezra Pound said that art consists of a constant and a variable.

He was probably thinking of an underlying poetic meter interrupted by the artist’s insertion of variables into the meter to effect semantic emphasis, lightness or heaviness, a faster or slower cadence, etc.

But the concept, to me, rings true on a multitude of levels and for any art.

I suppose it’s weird, but I don’t think I’ve ever even mentioned in this log that I am a musician and composer of sorts. Now that I have my stylin’ new web site with an Mp3 player (at right if you’re on the home page), I have what seems like a neat opportunity to discuss just what Not Johnny is all about. It’s especially neat because even though I’ve been working under that banner for about a year now, I’m just now figuring it out for myself.

That is, Not Johnny is the name of my musical project, but really it means a bit more to me, because it’s all mine.

My musical history is brief but colorful. Many years ago, I was in several non-entity bands (translation: no gigs) before hooking up with a couple of friends in the late 1980s (no laughing, please) to form a trio devoted to, basically, weirding people out. We wanted to make good music, to be sure, but it was a pretty dead time around the city, so our main purpose was to try to shake up the scene a bit–to inspire others to do weird things too. We were a fairly electronic outfit – synthesizers, drum machines, and myself on both of those plus guitar and – after a fashion – vocals.

We weren’t that great, but we weren’t bad either. The important thing is that we were unpredictable. We were able to get shows, I believe, because the venue owners were curious to see what we would do. That, and we played for free. In fact, at most shows we lost money. This was because we were intent on producing a new experience at each one. New songs, new set lists, and some new visual twist was necessary for each show. 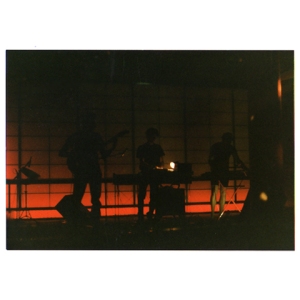 Our shtick was video. Not many bands were doing the video accompaniment at the time, but we were big fans of those who were – the Butthole Surfers in particular. So for almost every local show we either rented a 16mm projector or a video projector (those were new and expensive) and blasted the image from the back of the room up on the stage, or, after a while, deployed a series of thrift store televisions (plus, to my wife’s dismay, our actual living room television) on stage and hooked up to one or more VCRs through a ridiculous array of wires and video splitters.

We started out showing stock films from the university library. I kept checking the same films out with a cool professor’s permission, and they hated me for it, because they knew I was lying when I said it was for research. My favorite was one called “Making Metals Behave”, which had lots of cool footage of flames and molten metal bubbling in huge smelters. By the end we were producing our own twisted videos using old black and white TV cameras we somehow picked up from a local theater.

Anyway, that was then and this is now. I’ve always kept up with the guitar, and recently got into some computer recording equipment. The result, with a little help from my friends, is Not Johnny.

Not Johnny is evolving, and that’s what I like about it. There is absolutely no pressure, so I am just going with what feels right. My first several songs, which I got very excited about, showed all the symptoms of enthusiasm married with impatience. That is, a few were good but some were not – I was anxious to package up an “album” to show off to my friends and musical correspondents.

But more recently, I’ve been refining the sound into what, for lack of a better explanation, Not Johnny wants to be. And I find that Not Johnny wants to be part swamp rock, part instrumental experimentation. I think it’s a good mix (but then that’s me). And, getting back to where I started, I find I am most comfortable and most “real” when following Ezra’s bedrock axiom. the songs I’ve posted here today, I think, illustrate my embrace of that philosophy.
Crossroads was written in a hurry, then recorded one lazy, Guinness-inspired Sunday afternoon with my good friend and collaborator, King Dick (of local fame and a consummate musician of the old school variety).

The goal there was to make something simple – almost traditional – on its face, but with a complex arrangement that belied that same simplicity. I’m pleased with it, because I feel I pulled that conceit off. You can listen to it in the fashion of some CCR swamp dirge, with a steady and unchanging backbeat and bare-bones vocals, or you can listen to the interplay of guitars (3 of ’em) and the King’s harmonica to hear the complexity of the interwoven rhythms and melodies – simple alone, somewhat complex together. Constant and variable.

Loss2: Elegy is actually intended as a follow-up tune to a song called Loss Leader (which I’ve also included). Here the idea was to pair a very steady, 3/4 rhythm (unchanged throughout!) with two layers of guitars playing the same progression, but staggered, kind of like a round. This base simplicity is complexified with the two-part division of the song. It is basically split down the middle with the first “version” of the progression, which forms the crime (Jonestown) and the second version, the string section of which forms the elegy.

Enough talk. I hope you enjoy them.